In this post we will see Air Force vs Army ACFT. See how the Air Force makes out!

You know  what is going on YouTube. My name is Brandi Nunez.  If you guys are new to my channel I’m an A1C in the United States Air Force and as you guys can see from the title, we are doing something a little bit different for my channel.  We’re gonna be attempting the Army Combat Fitness Test today.

I am here with my two boys from the Army,  Specialist Amaura and Corporal Del Rio and we’re gonna be going over how to conduct the  Army Combat Fitness Test with brady over here. We’re going to teach him the ropes, we’re gonna teach them how to do it and hopefully to the best of our knowledge complete it.

Sweet all right, so what’s the first event? The first event is gonna be the hanging Leg Tuck.  There are some pretty significant changes to the current Army fitness test. The biggest one being that this new test is going to be genderless and ageless no matter if you’re male, female, 45 or, 20. It doesn’t matter. The standards are going to apply to everyone and the only thing that’s really going to differentiate the standards is going to be the difficulty of your MOS.  The Army Combat Fitness Test is currently going through field testing. So what that means is the test itself is actually being tested.

The current standards are just tentative, which means that changes can be made. The test isn’t going to be officially rolled out until October of 2020. Also it hasn’t been made clear what order these events are going to be done when the test is officially rolled out.  So this video is more to show you guys what’s to come in the future in 2020 for those of you who are thinking of joining the Army.

Yeah I think only got ten. Del Rio just made that look hella easy. That’s actually really hard. My body kept like twisting to the side but apparently the minimum is only three so I guess I’m doing all right.

so the next would be the trap bar deadlift. All the events have real-world carryover or they’re supposed to and it kind of almost to simulate something that you would do in a combat ready environment. What this event replicates is picking up ammunition boxes, a winded battle buddy, supplies or other heavy equipment that can be found in any deployed environment. That shit was hard.

Alright guys so the third event is the Hand Release Pushup. It prevents people from not reaching 90 degrees because between every rep your hands actually have to leave the ground. These are actually really tough. The test is to see the maximum you can do in two minute. So he’s gonna run a timer real quick. We believe that max might be 50 but like we said it’s all tentative. It’s not into effect yet, so we’re just gonna see how many we can get.  Just having some fun guys, trying to challenge ourselves a little bit.

My wife was watching this. Pretty good at  push-ups, cardio. This is about to suck. Okay, Ready get set, begin…

Alright guys and this Spring Drag Carry is a fourth event. This is a series of sprints.  First it’s a regular sprint then you drag a 90 pound sled, you also have to sprint with 2 – 40 pound kettlebells.  This simulates either carrying ammunition or pulling a friend in a combat situation.

So the next event is the Standing Power Throw. In this event soldiers toss a 10 pound medicine ball backwards over their head. What this simulates is the soldier’s ability to either lift themselves up or even lift a battle buddy over a wall. Something of that nature.  As I mentioned in the previous clip, we’re attempting this test more so to challenge ourselves and the day this was filmed we weren’t even doing it with competition in mind.

Now I ended up losing to the army because the last few events we kind of messed up when it came to recording our times so we don’t really know who the true winner was this day but if you guys do want to see a full competition video like this video up, I’ll be happy to do that. It would be a ton of fun.

We’re done with all the events, all we have left is a 2-mile run.  Well I’m just gonna get on a treadmill and do it real quick. So I appreciate you guys. Yeah definitely fun. We had a little bit of fun I’m gonna knock the 2-mile out where going to call it a day. 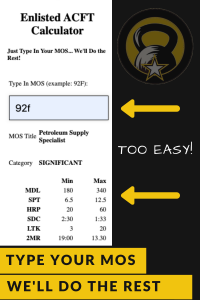